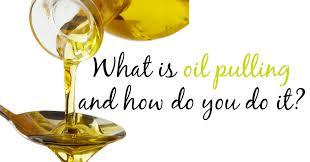 An ancient Ayurvedic ritual, oil pulling was introduced to the modern world in 1992 by Dr. F. Karach, MD. Dr Karach claimed that oil pulling could cure a variety of illnesses ranging from heart disease and digestive troubles to hormonal disorders.

To ‘oil pull’, simply put some oil into the mouth, traditionally sesame oil, but often coconut oil is recommended for its antibacterial qualities. You then swish the oil around and around. Let the oil move around and between the teeth, around the tongue, gums, etc., ideally for 20 minutes.

The basic purpose is to ‘pull’ bad bacteria from the mouth and spit it out in the oil when you’re finished. Neverswallow the oil and always spit into the toilet or a container, not the sink! It’s the physical property of the oil that attracts all the “gunk” in your mouth.

In the Charaka Samhita (traditional indian medicine text), oil pulling is described as: ‘beneficial for strength of jaws, depth of voice, flabbiness of face, improving gustatory sensation and good taste for food. One used to this practice never gets dryness of throat, nor do his lips ever get cracked; his teeth will never be carious and will be deep rooted; he will not have any toothache nor will his teeth set on edge by sour intake; his teeth can chew even the hardest eatables’.

While, obviously, we cannot confirm these claims, we also cannot deny that there may be some health benefits to oil pulling.

If you want to try it out for yourself, we don’t see any harm in oil pulling! We are unsure how many people will stick to an additional 20 minute regimen in their already busy daily routines!

Return to Blog Homepage
Like us on FacebookVisit us on YelpWatch our Youtube VideosLeave a Google ReviewInstagramBingFourSquare
Any surgical or invasive procedure carries risks. Before proceeding, you should seek a second opinion from an appropriately qualified health practitioner.
Contact Us Today
Give Us A Call
Dr Peter Etcell and Associates - (02) 9724 1163
Send Us an Email
Expanded Details View
This Patient's Experience
Loading Testimonial...
Loading Case...